Danger lurks below the surface

Cars catching fire in underground car parks are more common than one should think. A car catching fire in a car park under an airport terminal poses a particularly high safety risk. The real danger, however, are the highly
poisonous smoke gases.
Smoke extract via the ductwork.
The first and foremost task of extract air systems is removing the exhaust fumes through extract air ducts while fresh air is led into the garage via ventilation ducts or other openings such as the access slope. The heart of such a system is a two-stage axial fan. In the event of a fire, the second axial fan for smoke exhaust is automatically switched on.
The smoke gases rise towards the ceiling from where they are removed through duct systems. Creating different layers is usually not possible in underground car parks because of the lack of height.

Keeping spaces smoke-free with a jet ventilation system (JVS).
Jet ventilation systems are an alternative to conventional smoke exhaust systems. When in ventilation mode, the combined effect of radiation and induction of the jet ventilation fan ensures a particularly efficient mixing of air, the removal of CO gases and hence fresh air in the underground car park. The volume flows calculated for the car park are created by fans installed in the central shafts and are directed towards the outside; dedicated extract air and smoke extract ducts are not required.
In the event of a fire, the smoke gas temperature increases, and the gases risetowards the ceiling, where they spread. If smoke is detected, the fans, which are installed in the extract air ducts, are switched on and remove the smoke from under the ceiling. At the beginning, a layer is created which is nearly free from smoke. Escape and rescue routes are hence easy to recognise and allow people to leave the building.
The jet ventilation fans are only switched on after about three to five minutes.By that time, the people will have left the underground car park via the short escape routes. The jet ventilation fans dissolve the smoke layers in the previously selected areas, and 'dead corners' are being cleared. The firefighters can now locate and eventually extinguish the fire without being obstructed.
The jet ventilation system allows for large fire compartments so that underground car parks can be designed accordingly – open, spacious, and pleasant. Users will welcome the additional ease of orientation, feel better, feel safer – and are indeed safer in such a garage. 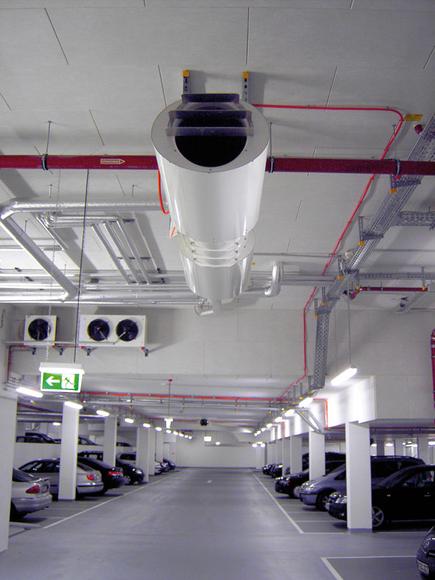 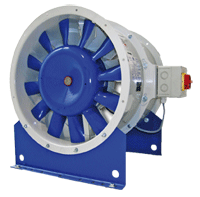 X-FANS smoke exhaust fans remove the smoke gases from the individual fire compartments in the garage. Customers have a choice of different constructions for various temperature ranges, depending on the garage layout.

To the Product page